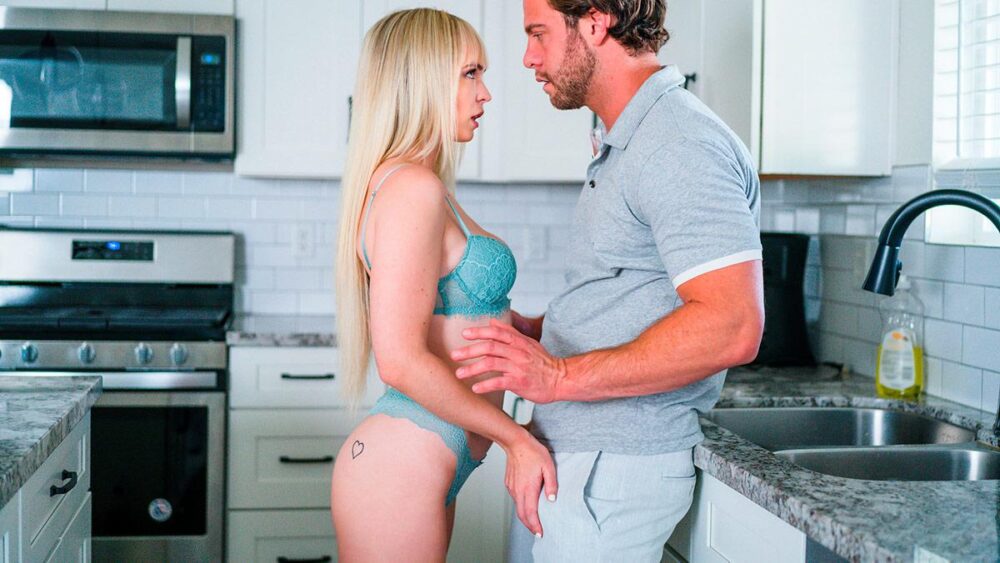 Lilly Bell has had the hots for her roommate Seth Gamble for a while now, but there’s just one problem: Seth has a girlfriend. When Lilly clues in that Seth’s relationship is in trouble, she realizes that it’s finally time to take some action on her own behalf. She puts her plan to action.
First, Lilly puts on some slinky lingerie to ask Seth what he thinks of the getup. Shocked to see his roommie looking like that, Seth stammers through a response to try to get her out of her room. Lilly doesn’t let Seth’s first rejection scare her off. She continues with her seductive plan by dressing in a skanky outfit and making an excuse to go out to where Seth is hanging out in their common area. This time, she catches him peeking at her hot bod and she knows that it’s only a matter of time before he becomes hers.
When Seth is doing dishes still later, Lilly sees that her best chance to get his cock for herself is finally there. Changing into another set of lingerie that Seth hasn’t seen yet, Lilly sneaks up behind him. She wraps her arms around him and feels his cock go hard as he realizes what’s happening. That’s all the permission this hotblooded blonde needs.
Turning Seth around, Lilly captures his lips in a kiss. Then she sinks to her knees to indulge herself in all the lusty things she’s been wanting to do to her roommate. Opening wide, she starts sucking as she explores Seth’s cock intimately. Then she makes it clear to Seth that he can have anything he wants as she turns around and peels off her scant clothing.
Seth helps Lilly up onto the counter and proves that he’s a giving lover who’s worth of her lust. Using his tongue, he blazes a path as he explores her soft slick folds. Then he puts Lilly on her feet with one foot on the counter to open her wide for their first coupling. He dips inside, filling Lilly up the way she’s been dreaming of, but that’s still not enough for this cock hungry hottie.
Lilly climbs onto a stool and leans forward, putting her pussy at the perfect height for Seth to fuck her from behind. The counter helps Lilly keep her balance as she enjoys Seth’s big D. It becomes even more important as Lilly gets to her feet and lifts one leg up to change up the angle of penetration yet again.
Seth finds himself on the counter next with Lilly sucking her own juices off his hardon. Then she joins him, climbing on top. She guides her dripping snatch down to settle on Seth’s man meat so that she can flex her hips and indulge in a stiffie ride that really gets her moaning.
Putting the stool to good use once again, Lilly sits on her bottom with her back supported by the island counter and her legs spread wide. Seth steps into that welcoming embrace and reenters Lilly’s tight glove. Throwing her head back in delight, Lilly lets Seth bring her home one last time before he pulls out to cover her in his cumshot as he accepts the claim she has staked on him.