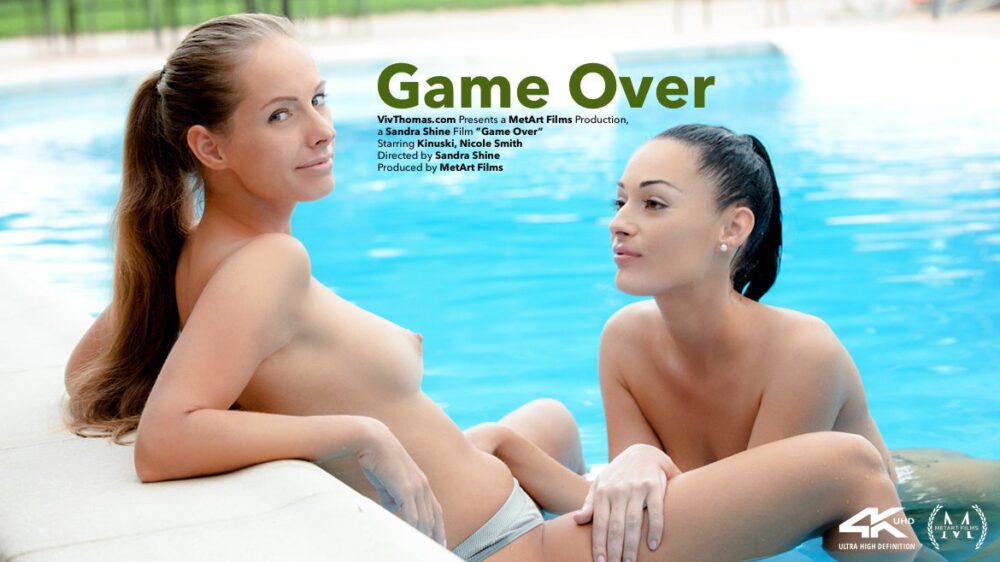 Cute girlfriends Kinuski and Nicole Smith are playing table tennis outdoors, as Sandra Shine’s hot lesbian movie “Game Over” begins. After plenty of sexy bending, stretching and jiggling, Nicole gets in a sulk about her poor performance, but Kinuski is quick to console her. Their tender kiss quickly turns passionate, the blonde’s hands moving to her sweetheart’s beautiful breasts amorously, followed by her eager lips. Nicole moans softly as Kinuski sucks her stiff nipples, then kisses her way down, removing her jean shorts as she goes. Nuzzling Nicole’s dark bush, Kinuski licks her pussy skilfully, tongue flickering to drive her wild. Nicole turns over and Kinuski eats her from behind, licking her tight asshole and soaked pussy until she has a powerful orgasm. Just then, Nicole’s phone rings, and after a brief chat, she says she has to leave. It’s Kinuski’s turn to be upset, but a few hours later Nicole returns to finish what they started. She joins Kinuski in the pool, tugging her bikini panties aside and licking her pussy slowly and sensuously, sucking on her prominent folds to give her an intense climax that was well worth the wait.