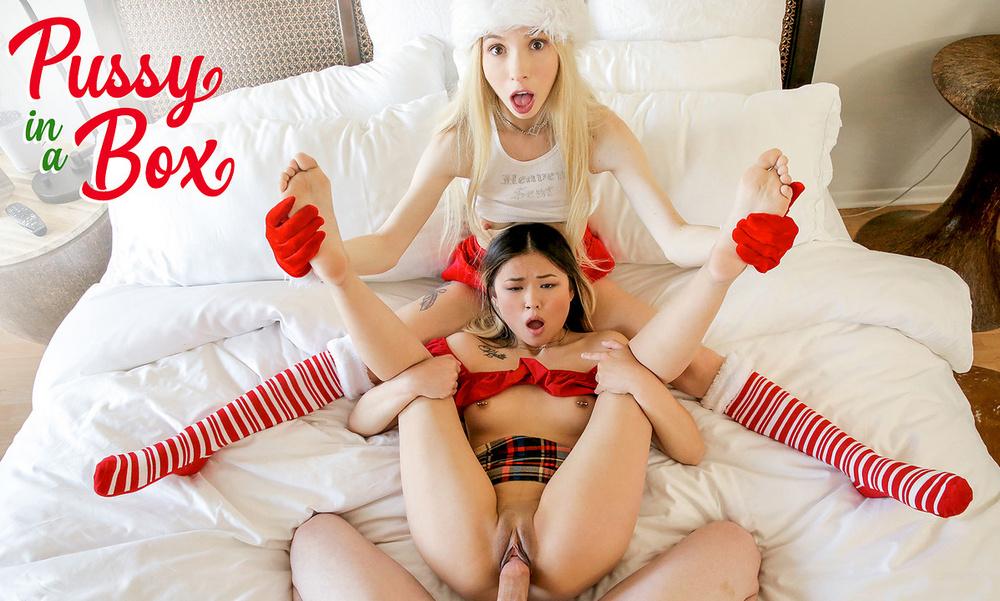 It’s Christmastime and Kenzie Reeves and her stepbrother Rion King have joined their parents, Artemisia Love and Dan Ferrari, in decorating for the season. The whole family is gathered together in the living room when their longtime friend, Lulu Chu, arrives from out of town for an extended holiday visit. Kenzie and Lulu are very close, but Rion is just now realizing how hot Lulu has become. The next day on Christmas Eve, the girls conspire to let Rion know that they both want his dick for the holidays, but they’re willing to share. As the family is opening Christmas presents, Kenzie gets Rion to open the box that Lulu is holding. Inside is Lulu’s pussy.
Rion barely keeps it together long enough for the ‘rents to leave. As soon as mom and dad are gone, Kenzie and Lulu make sure that their intent is crystal clear. They pop the box open again, revealing Lulu’s twat. With the girls’ encouragement, Rion eventually reaches out to touch. Once Rion is committed to delivering the pleasure the girls are begging for, they relocate to the bedroom so that he can make good on his promise. The girls in their slutty Christmas outfits hop onto the bed and lift their legs so that Rion can use one hand on each to explore their dripping twats. Then he gets to choose which pussy to plunge into first.
Lulu is the winner of the dick contest as she gets to take Rion all the way inside. Kenzie is happy enough to plant her pussy on Lulu’s mouth and ride her way to a good time. When Kenzie needs a break, she cuddles close to Lulu to help double down on her dear friend’s pleasure. Then she gets on her knees for her own turn with Rion’s fuck stick as her mouth gets busy feasting on Lulu’s cooch. Rion takes his turn in the middle next, laying on his back as Lulu mounts his fuck stick and Kenzie takes her stepbrother’s mouth for a spin. The girls swap spots, with each of them enjoying one more climax courtesy of Rion. They repay him in kind, working together to suck Rion’s cock and balls in a sloppy double BJ until Rion nuts in Kenzie’s mouth and gives her a nice wad to snowball with Lulu.